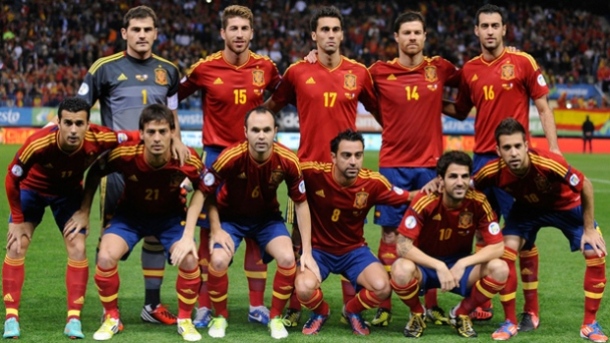 Because this is a World Cup year, I have decided to countdown to the tournament by providing a short soccer/fitness related preview of each of the 32 participating nations. In this installment, I will look at Spain, the current World Cup holders, who are trying to become the first team since Brazil in 1958 / 1962 to repeat as World Cup champions.  Spain has drawn a tough group that includes Holland, Chile, and Australia, and plays their first match against Holland on June 13th.

From a physical standpoint, a team with more possession of the ball is able to rest more than its opponent.  This does not mean that the team in possession does not run, because keeping the ball requires players off the ball to be moving constantly.  What it does mean is that the opposing team, which will be spending much of the game defending, will expend more energy than the team in possession.  Over time, this will cause the opposing team’s players to fatigue quicker, make more mistakes, and eventually concede goals that will likely cause them to lose the game.  Spanish players and coaches have realized these facts, and have spent countless years developing a style of play that tires out and frustrates opponents by forcing them to defend for the majority of the game, often keeping them inside their own half and under constant threat of conceding shots on target.  Interestingly, since shots on target was also one of the top predictors of success in World Cup games, the fact that Spain are able to keep so much possession of the ball in the opponent’s 1/3rd of the field has been instrumental in allowing them to generate more shots on target than most other World Cup teams.

If Spain are to be successful this year, they will likely have to stick the the strategy and tactics that have worked so well for them for the past 6 years.  Keep possession of the ball, complete more passes than the opponent, and try to do both of those things as close to the opponent’s goal as possible, which will allow for more shots on target.  We will have to wait and see what happens in 3 months’ time.

I’d love to hear your thoughts on this subject.  Drop me a line here to get the conversation started.