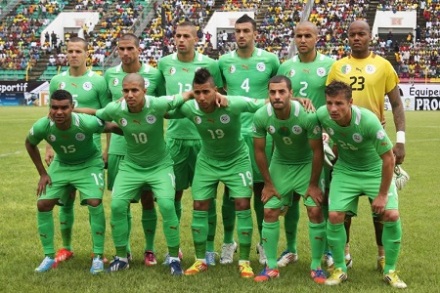 Because this is a World Cup year, I have decided to countdown to the tournament by providing a short soccer/fitness related preview of each of the 32 participating nations. In this installment, I will look at the Algeria, the north African team participating in their fourth World Cup, and trying to make their first ever appearance in the second round of the tournament.  Algeria have been drawn in Group H, which includes Belgium, Korea Republic, and Russia, and they play their first match against Belgium on June 17th.

Algeria is the only African team from the northern part of the continent at the World Cup. The country comprises 2, 381, 741 square kilometres of land, more than 4/5ths of which is desert.  The desert is known for one thing: lack of water, which leads to a dry, dehydrating heat.  For soccer players growing up in this part of Africa, the heat can mean only one thing – they will be sweating a lot every time they take to the pitch.  Hydration and electrolyte replenishment is a crucial part of success in soccer, but for Algerian players, it stands out as even more important.

When the body sweats, it loses water and electrolytes (ions of salts sodium and potassium, which are essential for optimal muscle contraction and function).  Recent studies done in elite level male soccer have shown that players can lose up to 5 grams of sodium through sweat per game.  5 grams is equivalent to 5000 milligrams, or ‘mg’s’.  This number is ominous when taking into consideration that the average amount of sodium in a typical Gatorade or PowerAde bottle (750mL) is only 250 mg’s.  So players who are losing up to 5000 mg’s of sodium per game through sweat will not get nearly the amount they need replenished from a traditional sports drink.  When I worked with the Canadian National Women’s U17’s, our Medical staff encountered this problem during some games played in the heat in countries like Mexico, Guatemala, and Azerbaijan.  One key strategy we used was to add salt to the players’ Gatorade or PowerAde bottles.  Typically, a salt packet containing 200-300 mg’s of sodium would be sufficient to add electrolytes without affecting the taste.  The exact amount of sodium required can be determined by checking players’ body weights before and after training or games.  If a player has lost more than 2% of their pre-training/ game body weight, then the amount of water and sodium they consumed was not sufficient. Add 300mg’s for the next training session/game and see if the weight loss levels off.  If it does, then you have the right concentration; if not, add another 300mg’s and repeat the procedure.

From all their experience training and playing in a desert climate, the Algerians must be very well-versed in hydration and electrolyte replenishment.  They will need to draw on this experience in Brazil another country with a very warm climate.  Can they do enough to get through to the second round for the first time in their country’s history?  We will have to wait and see what happens in 1 weeks’ time.