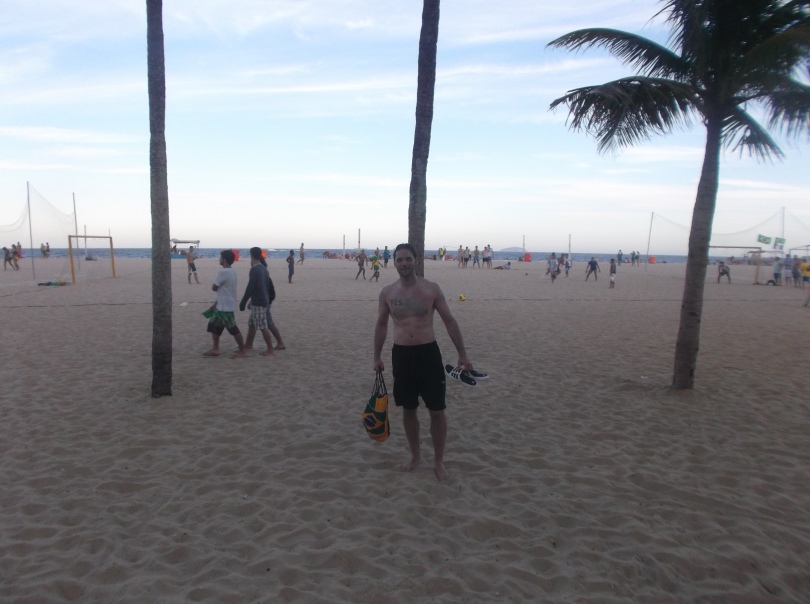 Yesterday was my last night in Brazil! As I was a bit occupied at night, I decided to do the blog this morning instead. I spent the day at Copacabana beach, and watched the Argentina-Belgium game at one of the many bars. I played some soccer-volleyball with some friends I met at the bar, then got into another pick-up game, with people from literally all over the world. In the game were people from Australia, Israel, United States, Ghana, Argentina, Mexico, and of course Brazil. It occurred to me that this beach, during the World Cup, is probably the only place in the world where you can have an experience like that. Pretty amazing when you think about it..

I got an email from my good friend Anthony Totera, who has a radio show in Toronto called ‘Red Card’. They were doing a series of interviews with Canadian soccer people who are in Brazil, and he did a short interview with me. We discussed some of the fitness and health related issues surrounding the World Cup, including how to deal with the heat and also pre- and post-game nutrition strategies. Here is the link to the audio of the interview:

At the end of the day I decided to stay in and watch the Holland-Costa Rica game at my hotel. Below are my thoughts about the game:

It seems that there are a lot of people on social media sites criticising Costa Rica for playing too defensively and ‘playing for penalties’. In my opinion this type of criticism is not warranted. Soccer at the highest level is not about entertainment – it’s about winning. The Costa Rican coach came up with a plan that gave his team the best possible chance to win. It almost worked, as they got themselves into a penalty shoot-out and might have won it if not for the clutch saves made by Holland’s substitute goalkeeper Krul.

Costa Rica has been a revelation at this World Cup. They are a tiny nation from CONCACAF, a region which has never had a team other than Mexico or the United States get into the knock-out round of the tournament. The team is basically devoid of star players, and other that midfielder Ruiz and forward Campbell, the rest of the players play either in the MLS or in the domestic Costa Rican league. They have proven that a team without great individual talent can succeed at the highest level through a collective group effort put towards a common goal. It is very impressive to see how well they did against teams like Italy, Uruguay, England, and even Holland, all of whom are comprised of millionaire players who play in the biggest leagues and for the best club teams in the world. I found their performance at the World Cup to be very inspiring, and it gives me hope that one day Canada may be able to compete at that level too.

I’d love to hear your thoughts about this. Drop me a line here to get the conversation started.