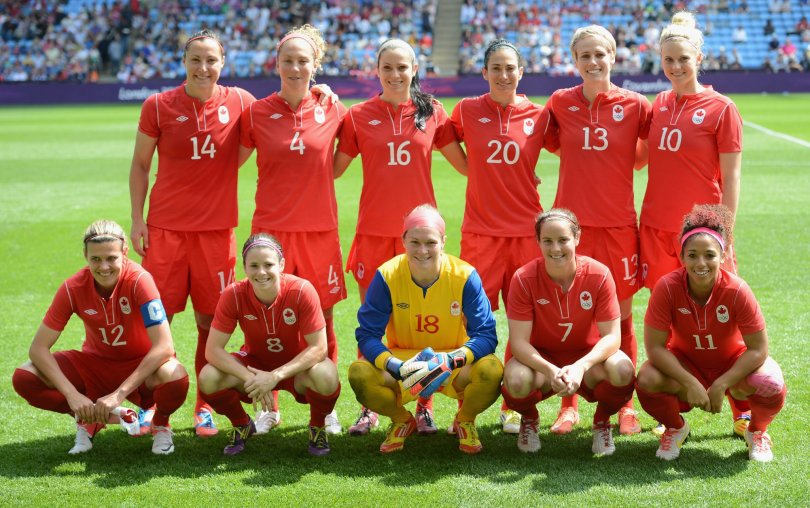 Because this is a Women’s World Cup year, I have decided to countdown to the tournament by providing a short soccer/fitness related preview of each of the 24 participating nations. In this first instalment, I will look at my home country Canada, who is hosting the tournament for the first time ever.   Canada has been drawn in Group A, along with China, New Zealand, and the Netherlands.  They play their first match to open the tournament in exactly one month, against China on June 6th, 2015.

The Canadians have had success at the Women’s World Cup before, having placed 4th overall in the United States in 2003, but other than that they have never advanced past the group stage.  Now, as host nation and coming off of a successful 2012 Olympic tournament in London, in which they won a bronze medal and were unlucky not to have reached the final, they will be looking to improve upon their 2003 showing.

When I worked with the Canadian National Women’s U17 team in 2011, then new Women’s Senior Team head coach John Herdman came to one of our training camps and spoke briefly with the coaches and players.  One concept he spoke about which he said was of critical importance to the success of a country’s national soccer program was the concept of “best with best”.  This concept, when applied to soccer, dictates that in order for a national team program to be successful, the “best” players in the country (as determined by objective measurement and analysis) must consistently train with the other “best” players in the country; they must consistently compete against other “best” players from other countries; and they must consistently work with the “best” coaching and support staff in their home country.  Coach Herdman mentioned that some of the other countries who have been the most successful in the women’s game, including the United States and Japan, utilize a “best with best” model, which includes residency programs for their youth national teams, as well as more frequent training camps and competitions against other strong national teams.

Many of the changes that have been implemented in recent years to the Canadian Women’s Senior National Team, as well as to the U20/U17 teams and the Provincial and Regional high performance programs, have been aligned with the “best with best” concept.  Among these changes include the inclusion/addition of full time staff including expert coaches, sports scientists, and performance analysts; the establishment of the “Residence Training Partnership” with the Fortius Sport and Health Centre in Burnaby, British Columbia (a fully integrated sports medicine, science and training venue that hosts training camps for all of Canada’s Women’s National Teams); as well as the establishment at the Provincial level of the “REX” or “Regional-EXCEL” programs, designed to ensure more of Canada’s exceptional young female players find their way into the best competitive environments in the coming years.

Will the resulting positive changes from the “best with best” model help the Canadian team to improve upon their 3rd place/bronze medal at the 2012 London Olympics and their 4th place finish at the World Cup in the United States in 2003?  we will have to see what happens in 1 month’s time.