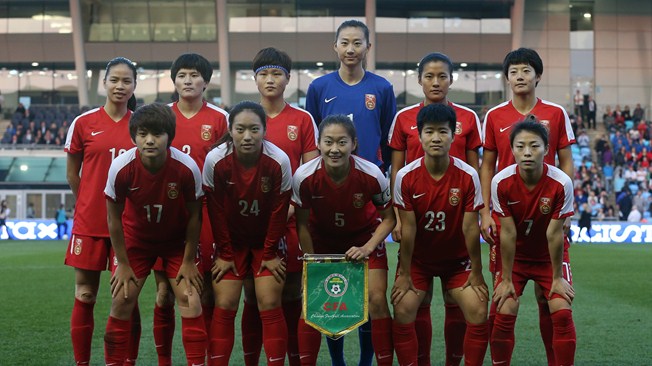 Because this is a Women’s World Cup year, I have decided to countdown to the tournament by providing a short soccer/fitness related preview of each of the 24 participating nations. In this instalment, I will look at China, who is making their 6th appearance at the Women’s World Cup, having only ever missed out once, at the previous tournament in Germany in 2011. China has been successful at the Women’s World Cup before – in the United States in 1999, they finished as runners-up to the host Americans. This year, China has been drawn in Group A, along with Canada, New Zealand, and the Netherlands.  They play their first match to open the tournament in exactly one month, against host nation Canada on June 6th, 2015.

The most unique aspect of the Chinese team this year is their youth.  Chinese Head Coach Hao Wei recently stated in an interview with FIFA.com:

“The average age of our players is under 23 and we are one of the youngest sides of the tournament. We have laid the foundation for the future national team.”

Interestingly, this average team age of 23 makes the Chinese team the youngest at this year’s World Cup finals.  While the players may have a lack of international experience at the highest level as compared to many of their opponents (including the host Canadians), their youth does provide them with some significant advantages.  Among them are a better ability to recover from muscle and tissue damage in between matches.  Many studies have demonstrated that younger players perform better on muscle strength, speed and power assessments done 24- and 48-hours post-match as compared to older players.  There are many different physiological factors that contribute to this quicker recovery seen in younger athletes.  Among these are faster protein re-synthesis (to repair muscle damage), increased testosterone and human growth hormone production (which aids in the prevention of of muscle/tissue damage and strengthens joints and ligaments), and better post-exercise removal of cortisol (a “stress hormone” which, if not returned to normal levels following stressful events including exercise, can lead to many physical problems including decreased bone density, poor blood sugar regulation, and lowered immune function).

Since the Women’s World Cup match schedule requires teams to play three group matches in the span of only 10 days, and then if they advance, another 1-4 matches over the next 20 days, recovery and regeneration between matches is a critical component to a team’s overall success in the tournament.  Teams with starting players who do not recover well between matches will be at a significant disadvantage as the tournament progresses.  Thus the Chinese team, as the youngest team in the tournament, will most likely have more healthy players who are better able to recover between matches, and as a result will be better able to start each match with their best 11 players.   Can the youth and enhanced recovery of the Chinese help them to improve upon their previous record?  We will have to wait and see what happens in 1 month’s time.