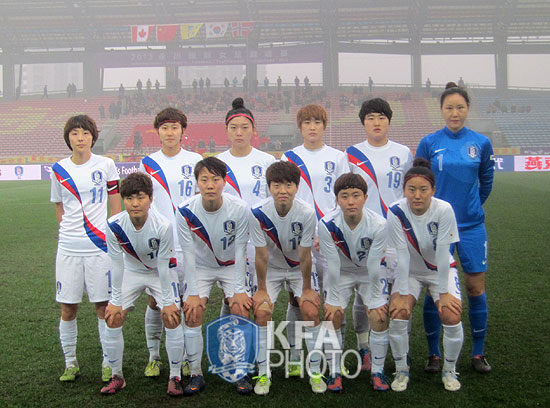 Because this is a Women’s World Cup year, I have decided to countdown to the tournament by providing a short soccer/fitness related preview of each of the 24 participating nations. In this instalment, I will look at Korea Republic, who are making their second appearance at the Women’s World Cup (their first was in the United States in 2003). Korea Republic have been drawn in Group E, along with Brazil, and Costa Rica, and Spain. They will play their first match against Brazil on Tuesday, June 9th, 2015.

Korea Republic had a good showing in qualification, eventually finishing in 4th place in Asia after winning their qualifying group and then losing to Australia in the semi-finals, and then again to China in the 3rd place match.  The Korean team will be bolstered by their most recent match, however, a goalless draw with the present Olympic Champions and World Cup runners-up the United States.  This match was played just 3 days ago, on Sunday, May 31st, and it was the final “tune-up” match for both the United States and Korea Republic teams heading into the start of the World Cup next week.

Psychologically, these “tune-up” matches can have a profound impact on the confidence of the players heading into a major tournament like the World Cup.  Although Korea Republic is a strong team that was ranked 18th in the world prior to the match against the United States, they headed into that game as underdogs and were thus very pleased with the result.  The players will likely feel very confident, especially because their defence and goalkeeping in this match was able to shut down one of the best attacking teams in the world, including star players like Abby Wambach and Sydney Leroux.  In their group, Korea Republic will face more strong attacking teams including Spain, and former World Cup runners-up and present South American Champions Brazil.  Can the confidence gained by their good performance in the “tune-up” match make a difference for them in the tournament?  We will have to wait and see what happens in 1 month’s time.