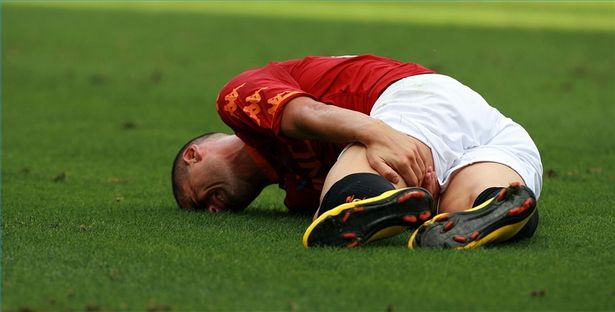 Hamstring injuries are very common in the world of sports, and especially in the sport of soccer. Injuries to the hamstring muscles can have a drastic effect on an athlete’s career and quality of life.  Audits were done on English Professional teams over two seasons and found that about 12 percent of all soccer related injuries were hamstring related. A hamstring injury can effectively sideline a player for up to 90 days. (Woods, Hawkins, Maltby, Thomas, & Hodson, 2004). It is clear that hamstring injuries pose a problem to athletes so it is important, as with any other injury, for players to participate in preventive measure to reduce the risk of injury. If/when a hamstring injury occurs, players should also follow proper rehabilitation practices and techniques in order to return to play as soon as possible and to prevent re-injury.

The hamstrings consists of three muscles on the back of the leg. The semitendinosus, semimembranosus and the bicep femoris insert at the ischial tuberosity in the pelvis spanning across the knee joint and then inserting on the medial tibia. The hamstrings function to extend the hip and bend the knee.  Hamstring injuries usually occur when there is a quick change in direction during a sprint or a jump. Often the injury occurs during the swing phase of running, prior to the foot touching the ground (Goldman & Jones, 2011). Many risk factors for hamstring injury have been described, being classified as intrinsic and extrinsic risk factors. Intrinsic risk factors include muscle weakness, imbalances, fatigue, poor flexibility and poor technique. Extrinsic factors include insufficient warm up, training parameters and playing surfaces (Goldman & Jones, 2011). Factors like age, sex and ethnicity play a role but are unmodifiable in nature. (Bahr & Holme, 2003).

Preventative measures can be taken to reduce the risk of hamstring injuries by increasing eccentric strength on the hamstrings. Studies have shown a 13 percent reduction in in hamstring injuries by implement a protocol which includes strength training to increase eccentric hamstring strength combined with warm up and stretching. This conclusion makes sense based on the fact that most hamstring injuries involved poor flexibility and muscle weakness. However, it was made clear that to effectively reduce hamstring strains, one must implement both a strength and flexibility component in their training regimen (Arnason, Anderdsen, Holme, Engebretesen, & Bahr, 2008,). An effective exercise that have proven to increase eccentric strength of the hamstring is the Nordic hamstring curl. Furthermore, athletes have to take into consideration the muscle imbalances they may have. Another study concluded that players with strength imbalances where 4-5 times more likely to receive a hamstring injury (Croisier, Ganteaume, Binet, Genty, & Ferret, 2008,). Unfortunately, this type of strength imbalance is common in soccer, because of the fact that many players develop a dominant or stronger leg. It is important to recognise any potential imbalances and implement corrective training measures to solve this issue (for example, participating in uni-lateral strength and flexibility exercises).

In the occurrence of a hamstring injury it is important to take the proper rehab precautions in order to heal as quickly as possible and reduce the risk of re-injury. A hamstring rehabilitation program usually consist of three stages; the acute, subacute and functional stages. In the acute phase of rehabilitation the goal is to protect the injury and minimise motion and strength loss. A common protective mechanism used to reduce inflammation is ice, but ultra sound and laser are used as well. At this time isometric strengthening should be done, with the use of knee flexion exercise at various angles. Once knee flexion strength is greater than 50 percent of uninjured length, the athlete may proceed to the next phase.

The second phase of rehabilitation (subacute phase) consists of concentric and eccentric training to regain strength and neuromuscular control of the hips and pelvis. Exercise done at this stage includes straight leg deadlifts, single leg windmills and the aforementioned Nordic hamstring curls. At this point the athlete should be within 20 percent of full strength and have the ability to jog forward and backward at a moderate speed.

In the final (functional) stage the focus of the rehab is on functional movement and eccentric strengthening and lengthening.  At completion of this stage athletes should have full strength and rage of motion. Bands are used to test the lengthening capabilities of the hamstrings. While using bands, the hips must be in a flexed position as the knee extends to ensure that the hamstrings are functioning properly. Tests that are commonly used to assess if an athlete is eligible to return to play are the H-test and the lengthening state manual hamstring test. Both test are designed to demonstrate full strength and range of motion of the hamstrings. (Schmitt, Tim, & McHugh, 2012)

In summary, injuries, including hamstring injuries, are an unfortunate part of participation in sports including soccer. It is important for all athletes, including soccer players, to take preventative action to reduce the likelihood of any type of injury. In the case of hamstring strains, strengthening the muscle as well as increased flexibility goes along way for injury prevention. If a hamstring injury ever occurs, following a rehabilitation protocol can be beneficial for a healthy recovery and the reduction risk of of re-injury.