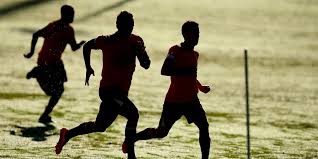 I have been obsessed with trying to find the perfect way to train for soccer since I was in high school, and I haven’t been in high school since 1999.

Over the almost 20 years which have passed since then, my obsession has provided me with the opportunity to start my own business; to work with some of the best soccer players in Canada as well as professional players/teams in other countries; to conduct and publish research; and, most recently, to create courses designed to teach other coaches and fitness coaches how to train their players and teams.

In the midst of the work mentioned above, I have also spent a considerable amount of time developing and administering fitness training programs, both on the field, in the weight room, and in my own facility, the Soccer Fitness Training Centre.  One key commonality that has been an integral part of all of the different training programs I have developed and used has remained the same: that the training methodology, as well as the exercises used, must be scientifically proven and evidence-based.

It is with this thought in mind that I have decided to share some evidence in support of what is probably the best and most efficient way for soccer players to train – high intensity aerobic interval training.

High intensity aerobic interval training involves the use of short-duration (between 5-10 seconds, up to 2-3 minutes), high-intensity exercise (usually higher than 80% of maximum heart rate or maximal oxygen consumption), with variable rest periods in between (work-to-rest ratios ranging from 3:1 to 1:5).

Key to the effectiveness of this type of training is the fact that the higher heart rate which can be achieved through short, high intensity bursts of exercise raises the number of calories burned per-minute and per-workout, and also increases post-exercise oxygen consumption, causing even more calories to be burned when workouts are finished.

As a matter of fact, one important finding of the study by Bacon et. Al (2013) mentioned above was that even people considered “non-responders” to lower intensity cardiovascular were training (meaning that they did not improve their cardiovascular fitness following low/moderate intensity aerobic exercise) were only able to “respond” – to show improvements in their aerobic fitness – with high intensity aerobic interval training.

Soccer players, because they participate in a sport that requires a similar activity pattern of short-duration, high intensity running and sprinting, can stand to benefit greatly from this high intensity aerobic interval training.

In addition to improvements in aerobic and anaerobic endurance, peak power output, and body composition, however, the most valuable aspect of high intensity aerobic interval training is perhaps that it can be completed in a very small amount of time (many of the studies cited above have used or examined the effects of training protocols ranging from a minimum of 5 minutes to just over 20 minutes).

This means that soccer coaches can improve their team’s aerobic performance with as little as 5 minutes of total training time, 2 days per week.  Of course, any extra training time that is saved can then be devoted to team technical and tactical training, which can further improve both individual and team performance in the long run.

Evidence in support of the effectiveness of high intensity aerobic interval training, both for athletes as well as for the general population, is very clear.  Soccer coaches and fitness coaches working with soccer players should consider adding this type of training into their routines, in order to get the greatest possible results in the least amount of time.