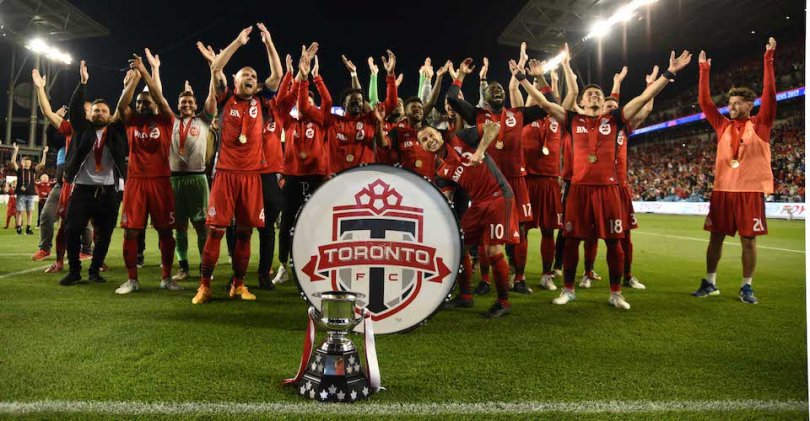 On Saturday, December 9th, in front of a packed crowd at BMO Field, Toronto FC defeated the Seattle Sounders 2-0 to win the 2017 MLS Cup.   Their win was decisive; they dominated the possession, defended well, controlled the rhythm of the game, created more scoring opportunities and capitalized on enough of them to ensure victory.

In the 20 days that have passed since this historic win, the city of Toronto has been abuzz with support for their Football Club.  It has been evident and visible in person across the city, as well as all over social media.

A question which must be asked amid all this success, however, is when – or even if – it will ever translate into improvement in the performance of the Canadian National Men’s Soccer Team.

With popularity of soccer in Toronto and Canada at an all-time high, our Men’s National Team still toils in obscurity; at the time of the writing of this article, we are ranked 94th in the world, behind countries like Gabon, Belarus and Armenia.

The United States has seen a similar surge in the popularity of soccer in the 23 years since their hosting of the FIFA World Cup in 1994 and subsequent inception of Major League soccer the following year, and yet, they too have had a recent drop in the performance of their Men’s National Team, having failed to qualify for the World Cup for the first time since 1986.

Just what is it about Canadian and American soccer that has led to these poor results internationally?  And what – if anything – can be done to capitalize on the popularity of Major League Soccer for the Canadian and United States Men’s National Teams to perform better in the future?

In this 3-Part article, I will provide my 3 suggestions, which began with Part 1 (instituting a limit on the number of foreign players playing in MLS, and non-Canadian players playing for TFC) last week.  This week, we’ll have a look at Part 2.

Part 2: Major League Soccer must develop a 2nd and 3rd Division, and Canada must develop its own national professional league, with a promotion-relegation based system.

In other words, incentivise clubs to win.

Let’s start by looking at the Canadian teams in Major League Soccer.  Canada presently has three professional teams competing in MLS (TFC, as well as the Montreal Impact, and the Vancouver Whitecaps), and another two in the North American Soccer League or “NASL” (FC Edmonton, and the Ottawa Fury).

Because neither MLS nor the NASL have a tiered-division system with promotion and relegation, none of the teams competing in these leagues (including the Canadian teams) are ever going to be truly motivated to win.

Of course, if a team in MLS od the NASL wins enough games, they will have the opportunity to make the play-offs, and eventually to win the league championship (the MLS Cup in MLS or the Soccer Bowl in the NASL), and this success could in turn bring more fans, exposure, and revenue to the team.

Regardless of any potential motivation that the prospects of success from winning games might bring, however, none of our Canadian professional teams will ever have to face the threat of being punished for losing through relegation to a lower division.

In the United States, the lack of incentive to win for professional clubs in MLS and/or the NASL must also be seen as detrimental to the success of their Men’s National Team.  Provided they can continue to generate revenue by maintaining fans’ interest, attaining and maintaining a television deal, and attracting corporate sponsors, any American or Canadian professional club can survive and even thrive in MLS or the NASL without ever having to produce a winning team.

Unfortunately, it does not appear as though a promotion-relegation system will develop anytime soon in North America.  In August 2017, MLS rejected a proposed $4-billion global media rights deal, involving a proposed partnership between MLS and the NASL, from international media company MP & Silva (a company owned by the owner of the NASL’s Miami FC, Ricardo Silva).

This does not bode well for the American and Canadian players – including the great majority of the US and Canadian Men’s National Team members – who ply their trade in these two leagues.

The need for a promotion-relegation system could not be more obvious.  In any other country, anywhere else in the world, soccer teams who finish in last place in their division (or, in many cases, also in 2nd or 3rd last place) get relegated to a lower division.

This means that the teams playing in MLS and the NASL (including the Canadian teams) are the only soccer teams in the world who do not have an incentive to win to avoid being relegated to a lower division.

Ironically, prior to their recent – and unprecedented – success in MLS, there could not have been a more perfect example of how the lack of incentive to win has affected a Canadian professional soccer team than TFC, which originally entered the league as an expansion team in 2007.  Here is a summary of TFC’s record (point total, place finished in their division, and place finished in the league) in their first 9 seasons in MLS:

In any other professional soccer league, in any other country in the world, TFC would have been relegated in at least two and possibly as many as five of their first nine seasons in Major League Soccer.  And it’s not just TFC; Montreal Impact, another Canadian MLS team, finished with just 39 points, 9th out of 11 in their division and 17th out of 19 overall in the 2017 MLS season.

You get the point.

It seems only logical then, that the Canadian players competing in these leagues and for these teams (many of whom end up representing Canada at the senior international level) may end up lacking some of the competitive edge needed to be successful in World Cup qualification and, ultimately someday, at the World Cup.  For the Americans, who missed out on World Cup qualification for the first time in 30 years, the same lack of competitiveness also likely holds true.

If Major League Soccer can find a way to set up and enforce incentives for its teams to win through a tiered-division system with promotion and relegation, then perhaps the United States and Canadian Men’s National Teams can be more successful at the international level in the future.