In this edition of the Soccer Fitness Gols Video Blog, I discuss and explain some of the evidence demonstrating that the technical, tactical and physical demands of Futsal are in fact higher than in 11 vs. 11 soccer. The implications of this evidence? That playing Futsal will make you a better athlete AND a better soccer player!
Hope you like it and as always, please feel free to pot your thoughts and comments! 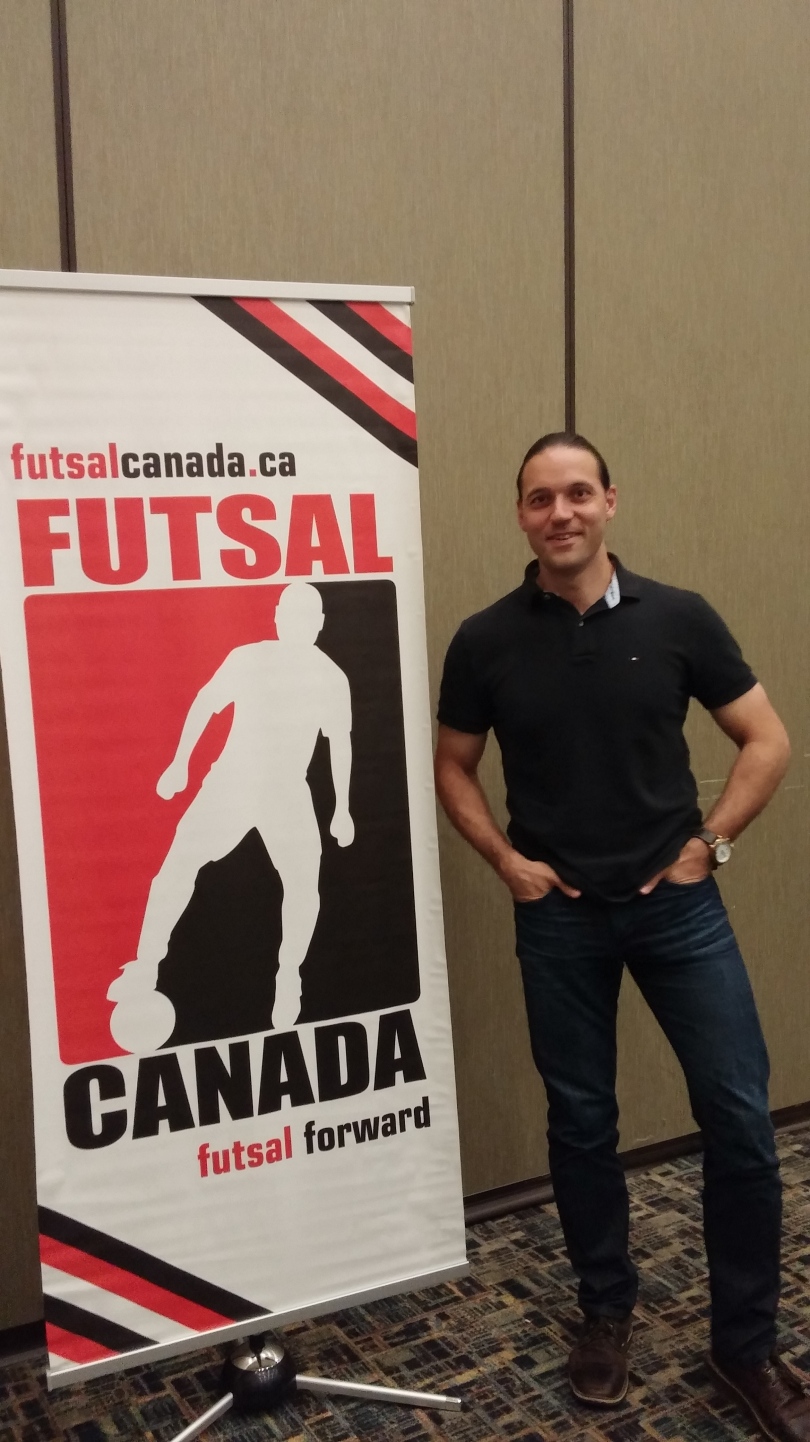 On the weekend of July 21st-23rd, 2017, I was invited to attend the first-ever Futsal Canada Conference in Ottawa, Ontario, and to give a presentation about the physical demands of futsal, plus guidelines and best practices for futsal coaches in testing, training, and monitoring their players and teams.

Representatives from 6 different provinces were in attendance at the Conference, among them members of the Canadian Soccer Association and the Head and Assistant Coaches of the Canadian Men’s National Futsal Team.  All of these people came together during the weekend with a  common goal – to move build, grow and develop the sport of futsal in Canada and to move “#futsal forward” (which was the hashtag for the Conference).

For me, attending this Conference was a revelation.  I had known about futsal and had followed the Canadian Men’s National Futsal team in their road to qualification for the 2016 FIFA Futsal World Cup in Colombia in 2016 (for which they narrowly missed out on qualification, having finished just 1 point shy in the Final Group B), but until this past weekend I had never realised how popular the sport really was in Canada, nor had I ever imagined that so many people across the country had such a vested interest in growing the sport.

While researching for my presentation, I was able to more clearly identify some of the scientific data that can provide insight into futsal’s popularity in Canada and across the world.  This article will briefly summarize the scientific literature specific to futsal that has allowed me to determine three reasons that Canadian soccer players should consider playing futsal.

A recent study by Barbero-Alvarez et al. (2008) determine that elite level futsal players had higher average heart rates (90% of maximum, versus typical averages of 80% of maximum in soccer) and spent more time in high heart rate zones (an average of 83% of their total game time at a heart rate greater than 85% of their maximum, versus typical averages in soccer of 70-75%).  Thus, when examining the time that players are on the pitch, futsal is played at a higher heart rate than soccer, indicating that development of the aerobic system will be accentuated in soccer players by playing futsal.

The same study also reported that futsal players performed a greater percentage of their total distances covered, running at high intensities.  High speed running and sprinting (classified as running at speeds greater than or equal to 22 km/Hr) accounted for 22% of the total distances covered in futsal (as compared to typical averages of between 10-15% in soccer).  Thus, not only is futsal played at a higher heart rate than soccer, it also requires more fast running and sprinting in relation to the total running done than soccer does.  In layman’s terms, this means that futsal provides a short-duration, high-intensity workout with a lot of fast running and sprinting – all of which is ideal to improve physical performance in soccer.

First of all, everything about the sport of futsal – including the rules, the pitch and even the ball – is specifically designed to encourage explosive, creative and attacking play.  Consider for a moment the following equipment specifications and rules:

Recent research has also identified that elite futsal players have significantly more touches on the ball during games than soccer players do.  A comprehensive study by the English FA and FIFA Research Departments indicated that individuals playing Futsal receive the ball five times more often than they would do when they are playing 11-a-side soccer (with 2.60 touches per minute in futsal versus 0.60 touches per minute in soccer), and that the percentage of time that the ball is out of play in futsal is less than 1/3rd than it is in soccer (11.5% in futsal versus 34.6% in soccer).  Ultimately, the rules and equipment of the game, combined with the small pitch size and greater amount of touches per player, mean that futsal players will have the opportunity to perform more fundamental individual skills, enabling them to maximize the development of these skills in each and every match.

Of course, these qualities in soccer players and/or futsal players are and always will be difficult to measure and quantify, however, we can me some reasonable assumptions based on point #2 above.  Because futsal provides more individual touches on the ball than soccer, it also provides more interactions between small groups of opposing players (1v1, 2v1, 2v2, etc.).

Ultimately, these extra interactions should lead to the development of a better overall understanding of the basic attacking and defending principles of play.  If players are exposed to these small-sided situations enough times, they should be able to predict the outcome of each situation more accurately, which in turn should lead to enhanced anticipatory ability and better positioning.  Over time, players who are better able to accurately position themselves earlier than their opponents should be able to execute any specific strategic and tactical plans more effectively, and their overall in-game performance should improve.  More research examining the effectiveness of small-sided soccer games, including futsal, on markers of players’ tactical performance, including through the use of software that can assess in-game player performance, is necessary before any definitive conclusions can be made.

Following the development of my presentation at the 2017 Futsal Canada Conference, the integral role that futsal can have in the development of young soccer players’ physical, technical, and tactical abilities, has become crystal clear to me.  All aspiring Canadian soccer players who wish to improve and maximise their development in these areas should consider paying futsal and help to “move futsal forward” in this country.